History Off The Page

Year 5 have, as part of this term’s topic, taken part in a Greek History Off The Page day. Children participated in different activities linked to the topic such as painting their names in Greek lettering, making medicines, soap carving and performing as part of the blessing for Goddess Athena at her temple.​ They even performed a tragedy and comedy in the style of the Ancient Greeks which was very entertaining.

As part of Maths Week, Year 5 took part in a Maths Problem Solving Workshop, which gave children the opportunity to use their reasoning skills.

As part of our Design and Technology Topic, Year 5 made and baked their own loaf of bread. Everyone enjoyed this process and we were able to link this with our science topic on materials and changing state.

As part of Math’s Week, some of our talented mathematicians in Key Stage 2 took part in the annual Times Tables competition. This year we did things differently; the children competed in year groups to complete 60 seconds times tables challenge on Times Tables Rock Stars. During the competition, each child had 60 seconds to answer as many questions which tested their times tables multiplication and division facts. 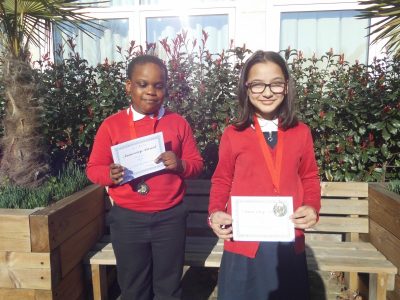 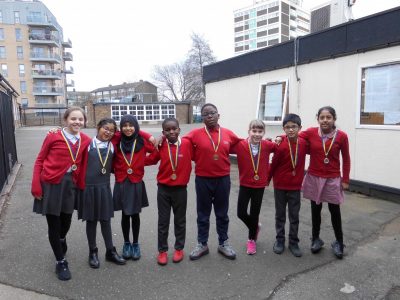 As part of Citizenship Week, Year 5 took part in the Junior Citizenship Programme, run by the local and emergency services, to equip our children with the skills and knowledge of what these services entail.  This group was the overall winning group of our Year 5 cohort. Well Done!

As part of our art topic on botanical drawings, Year 5 visited Kew Gardens. We took a guided tour of the green house where we discovered many exotic plants.

As part of our Literacy topic on warning tales, we focused on Romeo and Juliet as our model text and our hook into the love story. We had the pleasure of taking part in a drama workshop with Anthony Glenn to immerse ourselves in the text.

Congratulations to our Maths Bee finalists. After beating stiff opposition in a times-tables challenge in class, the four finalists competed against each other in the final. All four displayed their excellent times tables knowledge. The final result was first place Unais (5A), joint second place was Caleb (5J) and Maryam (5J), and in third place was Yahya (5A). Well done to all of you.

In Term 2, Year 5 visited the Royal Observatory and Planetarium for their Earth, Sun and Moon Unit for Science. They explored a photography exhibition on the Solar System, discovered many amazing facts in a self-guided tour and even took part in a spectacular presentation about the Universe. They even got to make their own sun dials!

During Black History week, Year 5  were given the wonderful opportunity of preparing a meal inspired by African and Caribbean culture with Mr Maxim from Kokura.

Mr Maxim delivered an informative session all about black history. We all came away feeling very inspired and the food was delicious.

History Off The Page: Egyptians

Year 5 have, as part of their topic, taken part in an Egyptian History Off The Page day . The children participated in various activities linked to the topic. They even had the opportunity to try out the mummification process! In the afternoon we they all took part in the Pharoah’s celebration.

During term 1 year 5 went on a trip to the British Museum to look at Ancient Egyptian artefacts. The children could not believe it when they got to see the sarcophagus of Cleopatra! Looking at these amazing sights helped us to write wonderful stories set in ancient Egypt.

As part of our DT unit, Year 5 were given the wonderful opportunity to bake bread with the fantastic Mr Maxim from Kokura. Mr Maxim delivered an informative session all about the history of bread, which was linked into our Ancient Egyptians unit.

In March, Year 5 had the wonderful opportunity to work with Martin Chandler as part of their DT Moving Vehicles unit with a cross-curricular link to The Ancient Greeks. They created some fantastic Greek Chariots for Ancient Greek Hoplites in battle.

In February, Year 5 had the opportunity to visit Canning Town Library where they were able to explore the facilities available to them. They also had a quiet read through a wide range of books, participated in an informative workshop and were able to take out books themselves.

History off the Page: Greeks

Year 5 have, as part of this term’s topic, taken part in a Greek History Off The Page day on Wednesday 11th January. Children participated in different activities linked to the topic such as painting their names in Greek lettering, making medicines, soap carving and performing as part of the blessing for Goddess Athena at her temple.

Hallsville is part of Agate Momentum Trust, which is a charitable company limited by guarantee and registered in England and Wales with registered number 11077761. Its registered office is at Hallsville Primary School, Radland Road, Canning Town, E16 1LN.
We use "cookie" files to help us to make your experience of using this website better. If you continue to use the site and do not change your settings, we will assume that you are happy to receive all cookies on this website. To find out more, see our cookie policy.