Dan the Skipping Man visited Hallsville for P.E week. He taught the children many different techniques for skipping and the kids had a wonderful time and got their bodies moving.

Year 3 have been celebrating cultural diversity week and have been making Japanese oriental fans. We learnt a lot about Japan and their culture and were really inspired to make our own.

The year 3 classes travelled back in time and became immersed in the life of Ancient Egyptians. They wrote hieroglyphics, made perfumes, amulets and bread and ended their day with a large festival where they got to perform and enjoy a feast fit for the Ancient Egyptians. They thoroughly enjoyed the day and will remember it for many years to come.

Year 3 went to the Science museum and got to explore all their learning of Ancient Egyptians. They saw mummies, canonic jars, coffins and even tomb paintings which they had studied at school. It was a great experience.

Year 3 have been learning about healthy eating. They got to prepare their own pasta dish. They learnt how to use different kitchen utensils safely and were able to prepare a delicious pasta dish that was healthy. The had a scrumptious time.

Year 3R have had the exciting opportunity of seeing how Jewish people worship at a Synagogue. They visited Sandy Row Synagogue and explored the meanings of key Jewish artefacts and important dates in the Jewish calendar. They were able to speak about Rosh Hashanah, Yom Kippur and Passover with our Guide Tony Selman.

Year 3H visited one of the oldest synagogues in East London, Sandy Row. They got to explore and learn about the different artefacts found in a synagogue and they learnt more about the Jewish religion. They really enjoyed seeing their learning come to life.

Year 3 went on an exciting trip to the Natural History Museum. There they got to see their learning come to life. They explored information about volcanoes and earthquakes and revisited learning from previous terms about rocks and fossils. They had a wonderful time and can now say they are mini experts.

Year 3 took part in World Book Day and dressed up as their favourite characters! We had a fun time dressing up and talking about it with our friends

In light of maths week, year three had a fun maths workshop where they got to work together to solve puzzles and problems. They had a great time and felt like mathematicians.

In light of Anti bullying week, we had a workshop that helped us understand what bullying is and how we can spot it. We did many role plays and discussed scenarios with our groups.

Year 3 had their geology day this week and were surprised to learn that nearly everything around us is made from rocks. They explored different types of rocks and grouped them according to their properties. They learnt about erosion and weathering and got to make fossils out of clay. They had a wonderful time and were immersed into their learning. 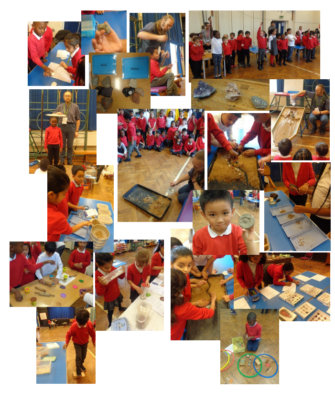 Year 3 have been working on creating relief sculptures using Modroc. We chose a symbol to represent our beliefs and turned it into a 3D sculpture. Finally, we painted it using metallic pain.  The final results look fantastic and we had a create time creating them.

We designed our dragon eyes over the holiday based on dragons we had chosen in school and then we made them into 3D dragon eyes using clay. We used marbles for their eye balls and decorated them with detail. We will go on to painting them once they have dried. 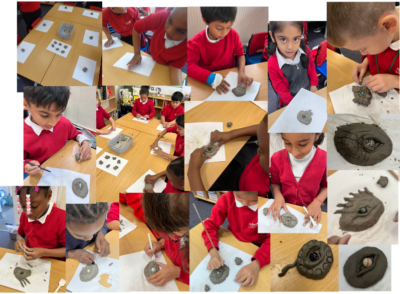 Year 3 went to London Zoo to learn all about the animals and experience them in their habitats. We got to see some rare animals like the Okapi. We saw some tigers, gorillas and an array of birds. We even got to see the monkeys up close as they swung on the ropes and played together. We had a brilliant time and we are even going to use the animals and their habitats as influence for our 3D frame designs which we will make later on this term.

Today we travelled back in time to the ancient Egyptian civilisation. We learnt about their beliefs and festivals and got immersed in their afterlife rituals. It was an unforgettable day!

Year 3 had their art day today and were taught by an art specialist from Bow Arts. The really enjoyed using water colours to paint in the style of the artist, Georgia O’keefe. They learnt how to blend and make different textures on paper. They then did a blended background wash which they cut up and made into a collage. After that, they cut out a picture of a flower using a stencil and stuck it on to another background wash which they did earlier.  The outcome was wonderful. What a splendid day!

Here are some photos for 3H during the Antibullying workshop on the 16th of Nov 2020. The children discussed what bullying is, what it might look like in schools or online and how we can help.

Pupils learned the signs, consequences and causes of bullying through drama, lead by an anti-bullying specialist. They role-played taking on different perspectives of a scenario and tried to explore the reasons why situation involving bullying could occur.

Year 3 got up close and personal with rocks of different kinds. They explored different types of rocks and soils and learnt how they are formed. They discovered what erosion can do to a city and learnt about different features of rocks and where they might be used in everyday items they see. It was a very exciting day and they thoroughly enjoyed it.

Year 3 had a drumming workshop in light of Black History Week. They learnt about the different drums, where they come from and how they’re made. They even got to show off their dancing skills to the beat of the drums.

3H went on a trip to the Community Garden in East Ham to do a wormery workshop. The children learnt about ways in which worms can be made to move up towards the surface, they got up close and personal to worms and they created a wormery. They even managed to pick some fruit at the end of the workshop.​

Year 3 went on a trip to the London Zoo to engage their learning of the current science topic which is all about ‘Animals including Humans’. They did a workshop on animal bones and then got to see the animals in action around the Zoo.

Ancient Egypt through a History off the Page Day

The year 3’s were immersed into Ancient Egypt through a History off the Page Day. They learnt about the history of Ancient Egypt through workshops and role play. This included; mummification, making of canopic jars, art, tasting food, making bread, writing hieroglyphics,  creating jewelry and making perfumes. They had a wonderful time and surely will not forget it.

3C and 3H went on an exciting trip to Chalk Well Beach on the 26th of April. They spent the day exploring and enjoying the beach. They searched for sea shells and other items they could use for their sand art which they created together in groups. They dipped their toes into the water and felt the sand on their feet. They even got to enjoy some yummy ice cream. It was a great experience which was used to enhance and feed into their literacy topic for this term. ​

The year 3’s got the chance to compete in a friendly football tournament. They versed one another and won medals for the teams which came 1st, 2nd and 3rd. The bronze, silver and gold medals were given to the children after the competition and were proudly worn by the children.

Children in Year 3 became pasta chefs for the day. They explored what a healthy plate should look like, designed their own packaging and logo for their pasta dish as well as getting to make their chosen pasta dish. They had a great time during this DT inquiry.

Year three thoroughly enjoyed their workshop on Holi. We enjoyed learning how to blow the conch to welcome visitors. Dressing up in the traditional costumes and holding a real flower garland that was presented to Krishna in the Temple.

As part of Math’s Week, some of our talented mathematicians in Key Stage 2 took part in the annual Times Tables competition. This year we did things differently; the children competed in year groups to complete 60 seconds times tables challenge on Times Tables Rock Stars. During the competition, each child had 60 seconds to answer as many questions which tested their times tables multiplication and division facts. 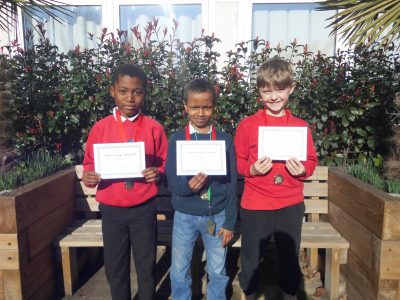 Year 3 visited the site for a Math’s workshop. The children explored the different shapes (2D and 3D) found around the college as well as patterns and symmetry. They had a chance to create their own patterns using geometrical shapes.

Year 3 went to the Natural History Museum where we discovered facts about Earthquakes. We took part in the earthquake simulation where it actually felt like we were in a real earthquake. The ground beneath our feet was shaking and the walls around us were rumbling. We had a sense of what it would feel like of we lived in a country that was at risk of an earthquake.​